Dave and Home are to launch on the free-to-air satellite service Freesat, giving Freesat users access to all of UKTV’s free channels for the first time.

From 1st August 2017, Dave will be available on Freesat channel 157, with Home appearing on channel 166. 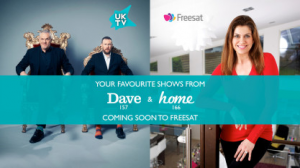 The other channel joining Freesat is Home – the UK’s only dedicated homes channel, bursting with inspirational home and gardens programming such as My Flat-Pack Home, Nick Knowles’ Original Features, Make My Home Bigger, Fantasy Homes by the Sea, and Kitchen SOS. Hit series on Home also include Extreme Makeover: Home Edition, DIY SOS, Escape to the Country, The Hotel Inspector and A Place in the Sun: Home or Away. Home first went free-to-air on Freeview in 2016 and describes itself as providing “welcoming, energetic and stylish programming”.

UKTV first made three of its Freeview channels – Drama, Really and Yesterday – available on Freesat at the end of 2015. The addition of Dave and Home will mean that Freesat viewers will be able to access the same range of UKTV channels as on Freeview.

The Satellite HD versions of these channels will still only be available as part of the Sky HD (Box Sets) Bundle.

All content used on this site are protected by copyright and should not be used without expressed permission. (C)2003 - J Worby
We can amend / edit any comments made to our website (via forms and forums), without notice or warning and without reason and by posting you agree to these terms. Privacy policy and terms and conditions can be found at : Cookies and Privacy and T&Cs
The Sat and PC Guy is a Registered Trademark in Spain - Nombre Comercial 294.968(7). Use of "The Sat and PC Guy", "The Sat and PC Guy" or similar terms without permission, for any business, especially Satellite and TV related businesses without permission is prohibited by Spanish Trademark legislation. Cookies and Privacy and T&Cs
All logos, product and company names are trademarks™ or registered® trademarks of their respective holders. Use of them does not imply any affiliation with or endorsement by them. For further information, please read the terms and conditions or email us. "Sat and PC Guy" is not affiliated with Sky.com. Sky, Sky+, Sky HD, SkyQ and their logos are trademarks or registered trademarks of British Sky Broadcasting plc., UK.
Posting....