Over the years Sky have produced a number of digiboxes, from the basic standard definition digibox, to the recording Sky+ digibox, and then onto the Sky+HD digiboxes in use today. The latest, SkyQ, is expected to be available in 2016.

As far as I know, it is NOT illegal to use a Sky viewing cards or watch Sky TV channels in Spain. However, you are breaking the terms and conditions of your Sky contract. The Sky contract states that the Sky viewing card is only for use within the UK only. This is due to how the broadcaster rights for the programmes on the channel that are on Sky TV are sold around Europe.

The Sky contact also states that the Sky card and Sky digibox must be connected to a UK telephone line or internet service. However, this is only true if you have had your Sky viewing card and Sky digibox supplied by Sky as part of a Sky installation. In the UK Sky heavily discount the installation cost. All equipment is their property for 12 months, and to ensure that it stays where is should they require the decoder to call back to the Sky computers every so often. After 12 months the equipment, the satellite dish and Sky digibox is yours and you can disconnect them from the telephone system. With installations in Spain, you are personally buying the decoders and dish so the equipment is yours from the start and although, as you did not get the equipment direct from a Sky you do not need to connect to the telephone or internet system.

Sky TV in Spain is, contrary to what some people believe, still available.

The expected mission lifespan of the current UK TV satellites, Astra 2E, Astra 2F and Astra 2Gis approximately 12 to 15 years. So we can expect no further changes to reception of Sky TV in Spain via satellite until around 2025.

What sized satellite dish do I need to receive Sky TV in Spain?

In the Valencia and Costa Blanca North areas of Spain, you will require a minimum of a 110 x 120 cm “1.2m” satellite dish.

A 125 x 135cm “1.4m” satellite dish is the recommended size required for Sky TV in the Valencia and Costa Blanca North areas of Spain.  We have found that the the 125cm x 1.35cm satellite dish that we install performs much better than other satellite dishes of similar size for the reception of UK Sky TV in Spain. 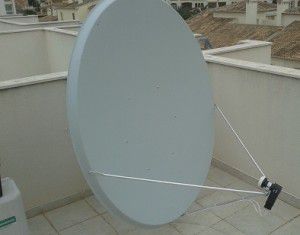 If you want more information on our satellite TV system, or want to arrange an installation, or a viewing please contact us using the form below :