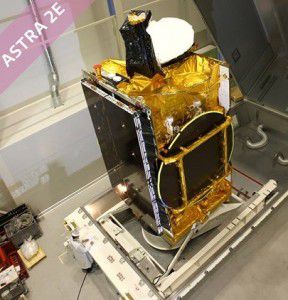 The Astra 2E satellite is a commercial communications satellite built by Astrium, France. Astra 2E will be operated by by SES, Luxembourg.

Astra 2E has a launch mass of 6,020 Kilograms being based on Astrium’s flight-proven Eurostar E-3000 platform that is capable of hosting powerful communications payloads.

The satellite features two deployable solar arrays for power generation and associated batteries and avionics for power storage and distribution. A dedicated bi-propellant propulsion system will be used for apogee manoeuvres and stationkeeping manoeuvres in Geostationary Orbit. Astra 2E is three-axis stabilized featuring a state of the art navigation system.

The payload of the vehicle consists of 60 Ku-Band transponders and 3 Ka-Band transponders. The powerful Ku-payload enables Astra 2E to contribute to the SES broadcasting concept from the important orbital slots at 28.2 and 31.5 degrees East. Astra 2E will be stationed at 28.2 degrees covering Europe and Africa to deliver Direct-to-Home (DTH) services via spot-beams and pan-European beams.

Both, pay-TV and free-to-air TV broadcasters will be provided by Astra 2E.

To deliver the Astra 2E Satellite to an optimized Geostationary Transfer Orbit, the Proton-M Rocket will perform a nominal ascent mission and deliver the Orbital Unit consisting of a Briz-M Upper Stage and the Payload to a sub-orbital trajectory. The large Proton-M Rocket will launch from Pad 39 at the Baikonur Cosmodrome, Kazakhstan. Separating after 9 Minutes and 42 Seconds, the Orbital Unit will start powered flight by igniting the Briz-M Main Engine to place itself in a Low-Earth Parking Orbit. In total, the Briz-M Upper Stage will make five Main Engine Burns separated by coast phases to increase its orbital altitude. After all burns are complete, the Satellite will be separated 9 Hours and 12 Minutes after Liftoff and start its own mission lasting for at least 15 years.

Mission Profile:
The Proton M launch vehicle, utilizing a 5-burn Breeze M mission design, will lift off from Pad 39 at Baikonur Cosmodrome, Kazakhstan, with the Astra 2E Satellite on board. The first three stages of the Proton will use a standard ascent profile to place the orbital unit (Breeze M Upper Stage and the ASTRA 2E satellite) into a sub-orbital trajectory. From this point in the mission, the Breeze M will perform planned mission manoeuvres to advance the orbital unit first to a circular parking orbit, then to an intermediate orbit, followed by a transfer orbit, and finally to a geosynchronous transfer orbit. Separation of the Astra 2E Satellite is scheduled to occur approximately 9 hours, 12 minutes after liftoff.

The Astra 2E Satellite will be launched using a Proton Rocket. 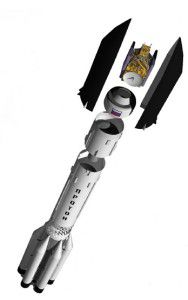 Breeze M Upper Stage
The Breeze M is powered by one pump-fed gimballed main engine that develops thrust of 20 kN (4,500 lbf). It is composed of a central core and an auxiliary propellant tank which is jettisoned in flight following depletion. The Breeze M control system includes an on-board computer, a three-axis gyro stabilized platform, and a navigation system. The quantity of propellant carried is dependent on specific mission requirements and is varied to maximize mission performance.

Third Stage
Powered by one RD-0213 engine, this stage develops thrust of 583 kN (131,000 lbf), and a four-nozzle vernier engine that produces thrust of 31 kN (7,000 lbf). Guidance, navigation, and control of the Proton M during operation of the first three stages is carried out by a triple redundant closed-loop digital avionics system mounted in the Proton’s third stage.

Second Stage
Of conventional cylindrical design, this stage is powered by three RD-0210 engines plus one RD-0211 engine and develops a vacuum thrust of 2.4 MN (540,000 lbf).

02/07/13 Update on Launch date: Astra 2E Launch delayed due to another rocket crash at Baikonur https://www.satandpcguy.com/blog/2013/07/astra-2e-could-the-launch-be-delayed-after-rocket-launch-failure-at-baikonur/

Astra 2E News Update: 20/08/13 : ILS, the International Launch Service, have updated their website, confirming the 15th September at the new launch date for Astra 2E. One should note that the 15th September launch time is local time for the launch site in Ukraine – so for Europe, this could mean a launch on the night of the 14th September 2013.

Astra 2E News Update: 11/09/13 : Rumours that the new launch date for Astra 2E is the 30th September, but nothing from official sources.

Astra 2E News Update: 10/09/13 : Reports from Ukraine are saying that the launch of Astra 2E on the 16th / 17th September has again been delayed. “A technical problem was found during the final inspection of the rocket Proton carrying the satellite Astra 2E on the cosmodrome Baikonur, a source in the cosmodrome said. No new launch date has been mentioned. Source: voiceofrussia.com/news/2013_09_11/Proton-M-launch-from-Baikonur-cosmodrome-postponed-due-to-technical-problem-2724

All content used on this site are protected by copyright and should not be used without expressed permission. (C)2003 - J Worby
We can amend / edit any comments made to our website (via forms and forums), without notice or warning and without reason and by posting you agree to these terms. Privacy policy and terms and conditions can be found at : Cookies and Privacy and T&Cs
The Sat and PC Guy is a Registered Trademark in Spain - Nombre Comercial 294.968(7). Use of "The Sat and PC Guy", "The Sat and PC Guy" or similar terms without permission, for any business, especially Satellite and TV related businesses without permission is prohibited by Spanish Trademark legislation. Cookies and Privacy and T&Cs
All logos, product and company names are trademarks™ or registered® trademarks of their respective holders. Use of them does not imply any affiliation with or endorsement by them. For further information, please read the terms and conditions or email us. "Sat and PC Guy" is not affiliated with Sky.com. Sky, Sky+, Sky HD, SkyQ and their logos are trademarks or registered trademarks of British Sky Broadcasting plc., UK.
Adverts
Our Recommended SMART DNS Services - Use these to enable access to the UK TV online catch up services like BBC iPlayer and ITVHub when outside the UK