Even now, there continues to b rumours and scaremongering being spread about the future of UK satellite TV in Spain, and this time some “misinformation” about the official Astra 2E UK Spot Beam Predicted Signal Footprint Map, and the new Astra 2Es reception in Spain. 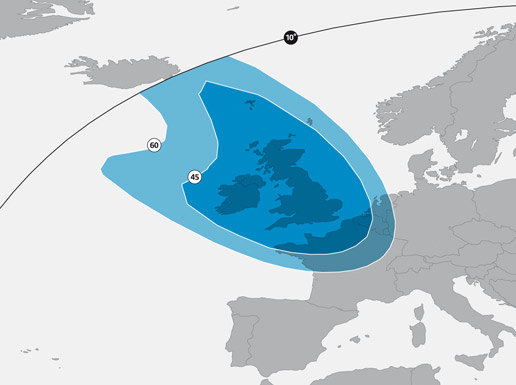 As in the past, most of these rumours are from people who sell IPTV / Internet TV / Smart TV. They state as a fact that anyone outside that “60cm satellite dish” contour will not be able to receive ANY signals at all.

This is incorrect. Just because the map does not show data outside that 60cm dish contour, for people using larger satellite dishes, this does not mean that no signals will be available in those areas.

The map shows no data for people in other areas using larger dishes, simply because either Astra do not know themselves, or they simply have decided not to publish that information.

Yes, some areas will be affected more than other areas. Some may find that they can still use smaller 1m, 1.25m, 1.4m and 1.8m satellite dishes in Spain for reception of their UK TV.

Also, the Astra 2E UK Spot Beam Predicted Signal Footprint Map is the exact same maps as the Astra 2F UK Spot Beam Predicted Signal Footprint Map. So whereas some IPTV / Internet TV / Smart TV sellers say no satellite signals will be available in Spain at all, this is contrary to the evidence we have for Astra 2F, which can be received, for example, in the Valencia and Costa Blanca areas on a minimum of 1m satellite dish.

At least if you are in a good satellite signal reception area, then you will be able to watch your favourite BBC1, ITV1 C4 channels in full HD , subscription free, with no buffering, on your nice large HD TV, something which many Internet TV / IPTV systems simply cannot offer at the moment due to internet speed and bandwidth restrictions.

All content used on this site are protected by copyright and should not be used without expressed permission. (C)2003 - J Worby We can amend / edit any comments made to our website (via forms and forums), without notice or warning and without reason and by posting you agree to these terms. The Sat and PC Guy is a Registered Trademark in Spain - Nombre Comercial 294.968(7). Use of "The Sat and PC Guy", "The Sat and PC Guy" or similar terms without permission, for any business, especially Satellite and TV related businesses without permission is prohibited by Spanish Trademark legislation. Cookies and Privacy and T&Cs All logos, product and company names are trademarks™ or registered® trademarks of their respective holders. Use of them does not imply any affiliation with or endorsement by them. For further information, please read the terms and conditions or email us. "Sat and PC Guy" is not affiliated with Sky.com. Sky, Sky+, Sky HD, SkyQ and their logos are trademarks or registered trademarks of British Sky Broadcasting plc., UK.